My life has been consumed recently with planning for the K2 mission (a mission where Kepler observes into the ecliptic). The Senior Review proposal to NASA has just been submitted and we have received over 100 proposals from community scientists to observe targets during our first science campaign. 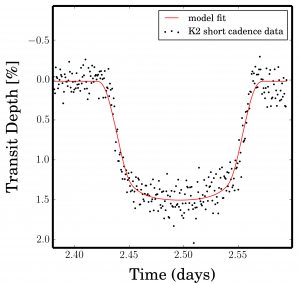 K2 managed to catch one transit of WASP-28b during a short test observation in Jan 2014. The data were obtained at 1 min intervals.

We have some data on the ground and the good news is that we can detect planets! We have observed our first exoplanet transit, WASP-28b – A previously known hot Jupiter type planet. I’ve posted an image of the transit, it looks beautiful. The noise may seem a little high but this is because the data were taken at 1-min cadence rather than our more usual 30-min cadence. There is also only one transit so we don’t benefit from overlaying multiple transits.

25 thoughts on “The first K2 observation of a transiting exoplanet”